Stock market has been bullish for quiet some time now. All the major indexes have hit all time highs this year. There are some saying that we are experiencing bubble in the stock market. There have been two major bubbles in the past 20 years. As the chart shows below( Thanks to the MSCI ): 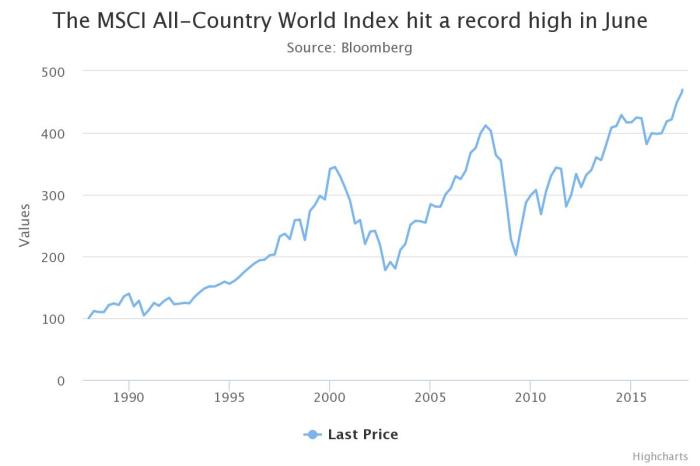 As you can see, there was the DotCom bubble back in 2000 and the housing bubble in 2008. It sure looks like we are at the edge of another bubble burst by seeing the pattern of the chart. What’s going to happen when stock market crash? Basically, there will be a drastic drop across sections in the stock market, in which would trigger investors panic selling to stop losses and push stocks prices lower. In worse case, it could cause a recession. However, we don’t see a crash happening any time soon. The world’s economy has been steadily recovered and growth since the last crash in 2008. There are some companies indeed over-valued in the market but not in such an alarming rate yet. As long as there is no sudden global event like wars among countries, which may trigger the burst. In the near future, we may see some correction which is a normal activity in the stock market. Overall, the market is still in a good place at the moment. We can’t predict what exactly is going to happen in the future, but opportunity would come for people who are prepared. We will revisit the situation next year.

Goran's layout adjusts itself depending on the device you are using. This means your site will look good not only on laptop browsers, but also on devices with smaller screens, such as the iPad and the iPhone.